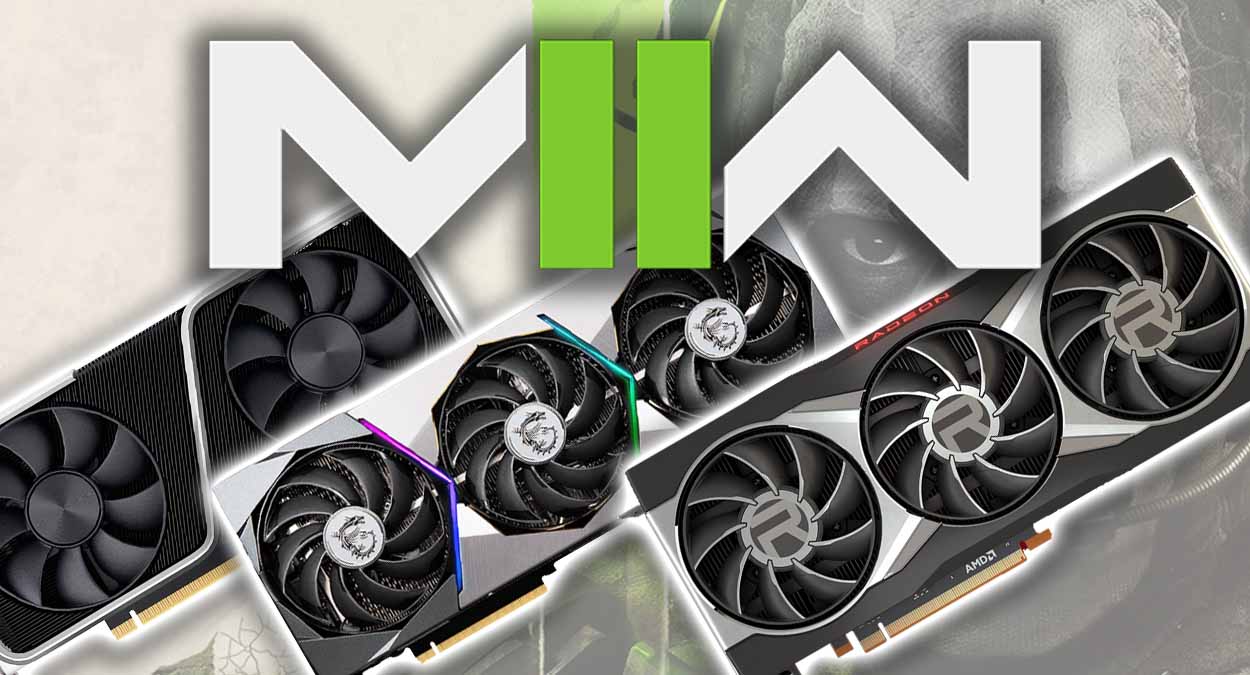 The new Call of Duty MW2 Remastered (2022) has gone down a storm within the gaming community, with gamers rushing to pick up the latest Activision title. But with any new game comes new hardware requirements, recommend specs and support for technologies such as DLSS and Ray Tracing. Is your graphics card good enough to run the new COD MW2 Remastered, and if not, which GPUs are best? In this guide we’ll be covering off the best graphics cards to buy for playing Call of Duty: Modern Warfare 2 Remastered at 1080P while achieving high frame rates. This guide will include a range of graphics cards, suited to all budgets, with designs from both AMD and Nvidia.

The minimum specs required for COD MW2 and recommended spec levels are quite modest by new AAA title standards. With just a 6th Gen Core i3 or 2nd Gen Core i5 from Intel required, it is a game that runs on even old hardware. The recommended specs are also pretty restrained, too. While users of old cards like a GTX 750 will be a little disappointed, the GTX 1060 is very low for a recommended spec sheet – but is it enough? Let’s find out with our detailed COD MW2 Remastered benchmark testing.

In a rather surprising fashion, AMD’s RX 6650 XT came out on top overall during testing and is our number one pick. Leaving its NVIDIA counterparts in the dust, the RX 6650 XT smoked the competition, only losing out to its bigger brother the RX 6750 XT in performance. Pulling in an average framerate of 191 Frames Per Second (FPS) the RX 6650 XT left little to be desired in the FPS department. Beating out the likes of NVIDIA’s RTX 3050, 60, 60Ti and even the RTX 3070 – yes you read that right – the RX 6650 XT more than earns the number one spot. For pure price to performance in Call of Duty’s Modern Warfare 2 at 1080P the RX 6650 XT is the clear standout performer, averaging roughly 30FPS+ more than the RTX 3060Ti whilst coming in at a similar MSRP, the results speak for themselves.

Even more impressive is that the RX 6650 XT beat out the RTX cards whilst having NVIDIA’s Deep Learning Super Sampling (DLSS) enabled. There are promising signs for the future of AMD GPUs, with NVIDIA’s DLSS historically having been the go-to when looking at render scaling technologies. AMD’s FidelityFX Super Resolution (FSR) was a surprise package, allowing us to gain a significant performance increase without the cost of losing visual fidelity. Whilst support for FSR may be lacking in other titles, it certainly wasn’t in Modern Warfare 2, working perfectly and without issue during our testing.

For those looking to push their GPU that bit further, there were encouraging signs at 1440P too. Tweaking the FSR settings and settings pre-sets and healthy FPS averages are there to be had. 1080P however, is definitely the sweet spot, with the game running at a much smoother and more consistent framerate.

The RX 6750 XT followed in the footsteps of the RX 6650 XT, outperforming all of the GPUs we tested bar none. With this being the case it would seem odd to only be awarded second place in our recommendations yet it is for good reason. Simply put, the RX 6650 XT sits at a much better price point than the RX 6750 XT, with the latter coming in at roughly $150 more. Whilst yes the performance increase of the RX 6750 XT against the RX 6650 XT was significant enough to potentially warrant the price increase for some, for those looking to play purely at 1080P the RX 6650 XT sits in the sweet spot, in my opinion, providing great performance without breaking the bank.

The RX 6750 XT performed so well in fact at 1080P that we feel that it may actually be slightly wasted at times. The RX 6750 XT averaged over 220 FPS during our testing, leaving clear legroom to be tested at 1440P. The RX 6750 XT may be the go-to choice, however, if you’d like to play at true 1080P. By disabling FSR the RX 6750 XT is still more than capable of playing Modern Warfare 2 at a consistent frame rate whilst also regaining the visual fidelity lost to render upscaling.

For those looking to play at competitive settings and max out on FPS, however, the 6750 XT does open up the possibility of playing on (and making use of ) a 240Hz monitor. Whilst not for everyone it’s a nice option to have but, yet again, likely brings additional costs to the table.

The RTX 3060Ti offers the best of both worlds, providing performance to challenge the RTX big boys at times, whilst still coming in at an affordable price point. The RTX 3060Ti maintained a consistent and steady frame rate throughout our testing and paired with a 144Hz monitor can produce an ultra smooth gameplay experience.