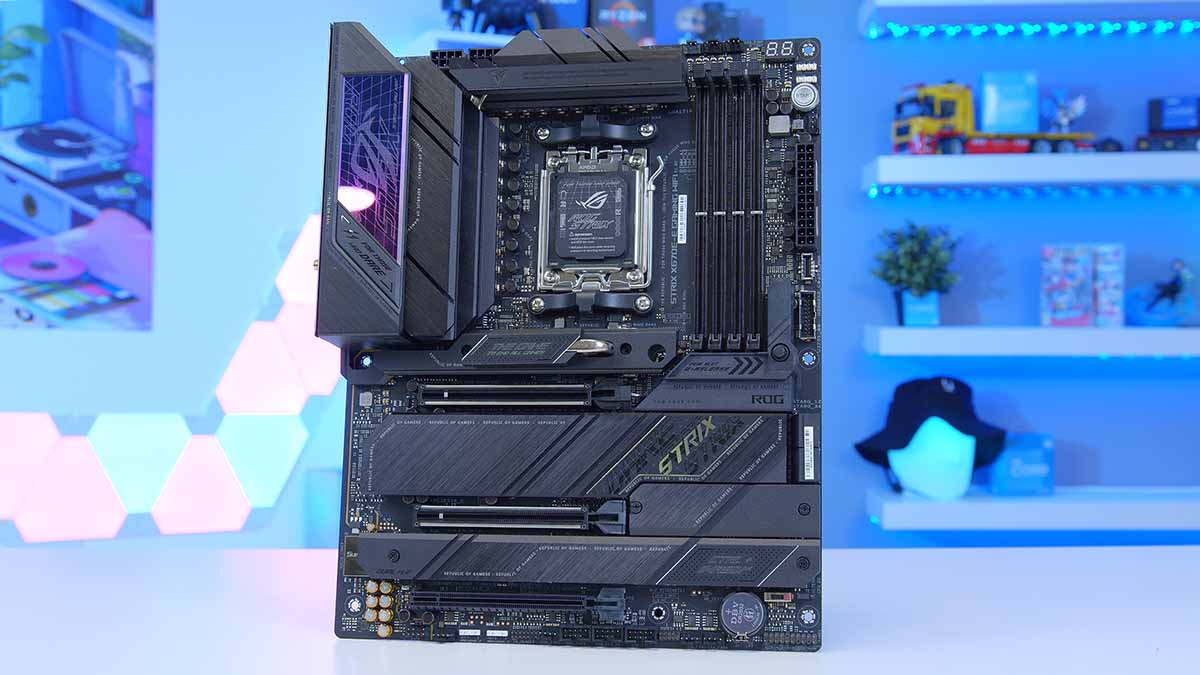 AMD has finally released their brand new Ryzen 7000 CPUs, and with the socket change and platform upgrade comes a whole new range of other components from new memory kits to power supplies and, perhaps most importantly, motherboards.

We’ve gathered up a huge variety of the latest X670E motherboards, picking apart the good from the bad. Today we’re taking a look at one of the top-end boards from ASUS, the ROG STRIX X670E-E Gaming WiFi.

As we’ve done so many reviews on the new X670E motherboards, I don’t want to keep hammering on about the same thing, so we’ll keep our overview of the X670E chipset a little briefer than usual!

The X670E chipset is the most premium and feature-rich chipset available out of the entire Ryzen 7000 range. Designed for extreme overclocking, coupled with support for widespread PCI-E 5.0, these new motherboards are set up to provide the best of the best for performance and connectivity. With PCI-E Gen 5 support for SSDs and GPUs, compared to SSD-only support on cheaper boards, the X670E chipset is destined to be paired with the highest end hardware.

You also get strong front and rear-IO connectivity on the X670E chipset, with a huge amount of high speed USB 3.2 ports, support for USB 3.2 Gen2x2, and USB4 ports on select boards. Needless to say, this chipset is ideal for those that have lots of peripherals and accessories.

The table below highlights the key differences between a motherboard on the X670 chipset, versus the board in today’s review. We’ve done this to provide some context on the kind of sacrifices you may be making when deciding on a chipset.

To quickly break down the differences, you’ll immediately notice a stark contrast between X670E and X670 motherboards. Power phases, PCI-E 5.0 slots, and USB ports have absolutely been maxed out on X670E motherboards, and I’m not surprised considering the price of these boards. X670 still holds up relatively well when it comes to USB ports with the inclusion of multiple USB 3.2 ports, but the ASUS ROG STRIX comes out on top when it comes to the number of these available.

PCI-E 5.0 connectivity for graphics cards are unfortunately locked behind the ‘E’ chipsets. The ROG STRIX board has 5 compatible slots, whereas the MSI X670 Pro only has one slot for an M.2 SSD. This is a restriction imposed by AMD, and not something the board partners can affect change with. ASUS have opted to offer no X670 non-‘E’ designs at present, presumably for this reason.

Overclocking is refreshingly similar between chipsets. Comparing both of these boards side-by-side, you’re only getting three extra power phases on the higher-end ASUS design. This could be the difference in a 100MHz clock speed increase, or a better score on Cinebench, but the difference in mileage won’t be huge.

There are mixed feelings within the GeekaWhat office around the design of this motherboard. Some of the team think that ASUS could have gone a little more ‘bold’ with their design choices on this board, bringing something a little more fitting of its top-end price point. Personally, I think it is an inoffensive, if a little plain, but looks good overall. The all-black colour scheme is stealthy in many ways, and very versatile in terms of matching up with your preferred build colour scheme.

ASUS have covered the board in heatsinks which ultimately does improve thermal performance, but means you get less of the signature RGB designs that come with older ROG STRIX boards. The rear IO panel does have a nice bit of RGB that can be customised with AuraSync, but otherwise there isn’t much fun to be had in terms of customisation.

Now for the most important section – the features. As we’ve alluded to before, the X670E-E Gaming WiFi has been crammed with a tonne of features offering users plenty of usability to improve your building experience alongside loads of next-gen options that come with the new platform upgrade.

I was actually quite impressed with the number of PCI-E 5.0 compatible slots on this board. From the get-go you’ll be able to see two PCI-E 5.0 ready x16 slots designed to house the latest GPUs. So if you plan on buying two Nvidia RTX 4090s, this board supports it. For those looking to pick up a brand new Gen5 SSD, you’ve also got access to two x4 slots for M.2 allowing you to make use of the blazing-fast speeds that come with the generational upgrade.

As the X670E chipset is designed to support the best overclocking possible, many of the new boards have an insane amount of VRMs, and this ROG STRIX option follows suit. You’ve got 18+2 power phases equipped to rapidly respond to changes while offering stability. The thermal design of the dual heatsink array provides ample surface area to handle the high power needs and thermal output of the VRMs, ensuring your motherboard is nice and cool.

Unfortunately we aren’t seeing any of the new USB4 ports on this motherboard, but what we are seeing is a gargantuan amount of rear and front IO allowing you to plug in as many peripherals and accessories as you desire. The rear IO houses 13 ports in total with all of them being USB 3.2 compatible. The front USB headers can also support up to nine ports in total with a few inclusions being compatible with USB 3.2 Gen2x2 and 3.2 Gen1. Overall, if you need USB ports, this should be your go-to board choice.

With any new platform, especially one as fresh as Ryzen 7000 architecturally, there can be a fair share of problems, but ASUS has made building with the ROG STRIX X670E-E board much easier. The main PCI-E slot houses a Q-Release latch that allows you to easily remove your GPU to save your cramming your fingers in between components. The M.2 slots also have a similar latch approach that fastens your SSDs in place with ease.

For diagnosis and troubleshooting, on the rear IO you can utilise the Clear CMOS and BIOS Flashback buttons to make any quick changes to your board. The included Q-Code LED also makes troubleshooting much easier when trying to figure out why your PC isn’t booting.

All of the various top-end motherboards on the X670E chipset offer plenty of little extras in the box that make building your PC much easier, and can save you some money in the long run. We’ve listed all of the extra that come in the box below:

All of the brand new Ryzen 7000 CPUs aren’t locked behind any particular chipset, so all of the options within the available range are compatible with all motherboards on the AM5 platform. However, as much as you could pair a Ryzen 5 7600X with this motherboard, we wouldn’t recommend it. Getting the best value for money and performance out of your system involves choosing the right components for your build, so for this reason we’d recommend sticking to the Ryzen 9 range of CPUs and Ryzen 7, as these are the best performing CPUs that you can buy.

Despite the ASUS ROG STRIX X670E-E Gaming WiFi having a not-so catchy name, this board has caught my attention. Although the design of this motherboard isn’t particularly impressive, I think ASUS’ vast list of features that they’ve crammed into this board is awesome. Looking at the motherboard, I couldn’t quite believe how many USB ports there were, and the utilisation of PCI-E 5.0 ports across the majority of this board is definitely a big selling point. However, I do have some major points of contention. First is of course the price. This motherboard is not cheap in any way shape or form, and we would only recommend it high-end enthusiast builds. This board is not needed for gaming and is definitely overkill. My second point is the overclocking capability. Although the 18+2 power phases is definitely great for overclocking, there are other motherboards coming in at a similar price that have better power phases and similar cooling capability. For a chipset that is ‘designed’ for extreme overclocking, I feel considering the price, this could be a little better. For substance over style, wide-ranging connectivity and ASUS’ famed reliability, look no further than the STRIX X670-E.

❌ Overall aesthetic is a little plain.