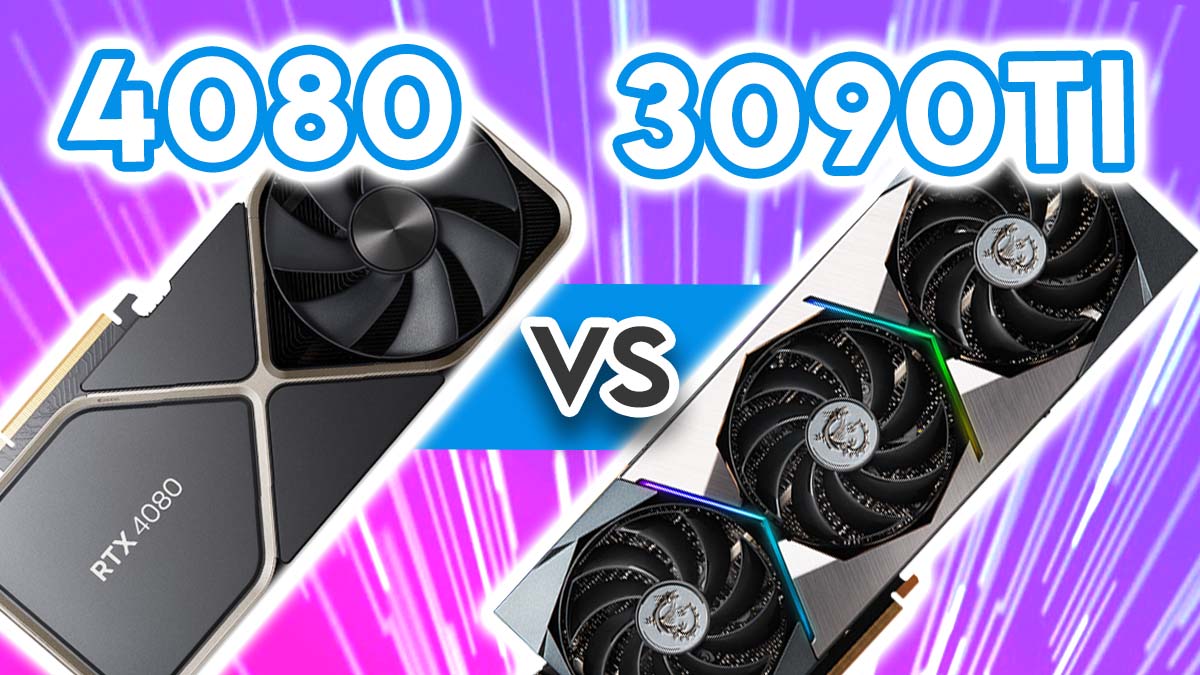 The GeForce RTX 3090Ti from Nvidia was last generation’s most powerful gaming graphics card, setting the bar very high for competitors. Meanwhile, Nvidia’s RTX 4000 series has been long awaited, with consumers holding out to see how they the latest generation of cards perform.

With the successful launch of the RTX 4090, many are hoping that the new RTX 4080 offers similar performance at a lower price point. Today, we’ll be seeing how the previous generation’s titan, the RTX 3090Ti, compares against Nvidia’s brand new RTX 4080. Will there be significant performance gains, or are we likely to face diminishing returns? We’ll be testing this out in a GeekaWhat GPU Versus Battle!

The brand new RTX 4080 is surprisingly the second card to release within the RTX 4000 range. This roles have been reversed from the RTX 3000 launch, which had the RTX 3080 release first. It was an interesting choice from Nvidia to release the top-end flagship first, leaving many consumers chomping at the bit to get a more mid-range oriented card. Hardware wise, the RTX 4080 sports less cores and VRAM than the 3090Ti. With 76 RT cores and 9728 CUDA cores, you’re losing around 10% in comparison to the 3090Ti. Despite having less in terms of cores and VRAM, the boost clock of the 3080 is over 600MHz higher, giving us a clock speed of 2.51GHz. This will ultimately allow the graphics card to handle instructions quicker, but less of them due to the VRAM capacity.

In terms of performance, the RTX 4080 offers great metrics in 4K gaming with Ray-Tracing enabled. RTX 4000 cards come with Nvidia’s latest Ada Lovelace architecture, which means consumers get to enjoy the benefits of brand new technologies such as shader reordering, and DLSS 3. The new DLSS technology is a very big win for Nvidia, offering significant performance gains with their Frame Generation technology. Using the 4080 with DLSS enabled, consumers can experience upscaled resolution with less performance overhead, as well as more frames than previously possible.

When we look at prices, the 4080 becomes a little less desirable. The MSRP of this card sits just above the $1200 mark, which is around $500 than the original MSRP of the 3080. Although the 4080 is better than the MSRP of the 3090Ti, this is still a very expensive card. As you’ll find out shortly, the performance is excellent, but this card is definitely geared towards enthusiasts and high-end PC builders!

Nvidia’s RTX 3090Ti was one of the final graphics cards to release within the RTX 3000 range, and marked a first for Nvidia. Prior to the RTX 3000 series, we had never received a ’90’ SKU, making the release of the 3090 and 3090Ti an impressive feat. The 3090Ti was set to bring unprecedented performance for gamers and enthusiasts, and Nvidia did not disappoint. The 24GB of GDDR6X memory was mind-blowing to see, along with over 10000 CUDA cores, and 84 RT cores. However, with significantly improved hardware follows a higher TDP. Consumers looking to pick up an RTX 3090Ti would need to get themselves a new power supply to handle the increased wattage. The wattage increase is a small price to pay for high performance, but if you’re building a high-end system, you’ve probably picked up a PSU that can handle high wattage.

Performance wise, the RTX 3090Ti was the highest performing GPU prior to the release of the RTX 4090. Although the 3090Ti has been beat out by newer additions, this card still performs incredibly well at high settings, with 4K posing no issue to this card. The 3090Ti also has excellent Ray-Traced capability, offering high frames without breaking a sweat. Even though the 3090Ti doesn’t have access to the new DLSS 3 technology, DLSS 2 still proves to be very useful when reducing performance overhead. Overall, the 3090Ti is an excellent all-rounder and is extremely capable when thrown at intensive workloads.

When we look at price, it starts to become a difficult conversation. The original MSRP of this card was $2000, which is the highest we’ve ever seen for a consumer-based GPU. Although the original MSRP has significantly dropped and is actually better versus the 4080, whether the 3090Ti is still worth picking up depends on price to performance metrics. The RTX 3090Ti is still an incredible card, but with all high-end cards, the price is always the biggest caveat.

We get a variety of components and products that come through the GeekaWhat office. To ensure that all of these components perform properly, we’ve developed a rigorous testing methodology. The first step of our method is making sure that our benchmarks are repeatable and fair. We do this by highlighting all of the settings used whenever we play a game or run an application. All of these runs are recorded and then uploaded to our benchmarking YouTube channel, which has been linked below in the benchmarking section.

Any components or products that we decide to review or test are also paired with a system that has similar components. For example, we won’t pair a top-end GPU with a CPU like Intel‘s Core i3 12100F as it allows each component to perform optimally, minimising bottlenecking and reducing hindrances.

Every components that we receive from manufacturers or buy are rigorously tested to ensure that they work inline with the advertised performance. All of the graphs below have been compiled from a variety of benchmarking runs in triple A and Esports, providing context on how a graphics card or CPU might perform in terms of frames. You can find all of the runs on our YouTube channel – ‘Benched’.

For our first benchmark we put the RTX 4080 and 3090Ti up against Fortnite at 1080P Competitive settings. Needless to say this won’t be difficult for either GPU, but we get to see how high the framerates can soar in this very popular title.

Looking at the graph you’ll be able to see the 4080 reaching an average framerate of 304 which is one of the few GPUs to surpass the 300FPS mark, which was very impressive. The RTX 3090Ti is following close behind with around 291 frames, which is enough to enjoy a very high refresh rate. Its good to see here that the 4080 comes out on top, but the 3090Ti is very close in performance.

In Battlefield 2042 this is where we start to see both of these GPUs struggle at a 4K resolution. Both the 3090Ti and 4080 managed to output very decent framerates giving a more than playable experience, but we were saddened to not see the 144Hz sweet spot here. However, this is ultimately down to the poor optimisations of this title.

In Apex Legends, the 3090Ti and 4080 stretched their legs here showing how capable they are with intense workloads. The RTX 4080 was one of the best performing outputting 159 frames on average which was more than enough for a buttery smooth refresh rate. The 3090Ti was close behind offering up around 140FPS. Although this isn’t exactly at the 144Hz mark, it was still an incredibly smooth experience.

For our final game we decided to benchmark COD Warzone at 4K. Here we’re seeing the significant generational improvements that comes with the new RTX 4000 series. Although the framerates aren’t massively different between the 4080 and 3090Ti in this title, picking up a new card could be the difference in reaching a 144Hz refresh rate.

To loop back around to the question in the title of this article, which of these two cards is better? Well, from looking at the graphs, the 4080 is a clear winner when it comes to numbers, but we’re not as black and white as this. Despite the 4080 offering excellent performance, the difference in frames in the majority of titles isn’t gigantic. Although we definitely saw some big improvements in unoptimised titles like COD Warzone, you probably won’t see a visible performance improvement in most other games.

If we’re taking this from a productivity standpoint, the answer would be different, and we’d encourage picking up the 3090Ti due to the better specs and higher VRAM capacity. To finally come to an answer, as always we would urge looking at your use-case and budget to figure out which of these cards is the better option. Both the RTX 3090Ti and 4080 are incredibly powerful cards and will suit a wide range of people dependent on your usage and the type of PC you’re trying to build.

If you’re building a workstation oriented PC, then a 3090Ti is the golden standard (besides the 4090, which you can check out in our other reviews and comparisons). And because the 3090Ti is much cheaper (at the time of publishing) compared to RTX 4000 cards, this might be a better bet. If you’re looking to build a super powerful 4K gaming system the 4080 is a better option, but be aware of the significant price hike with Nvidia’s new GPUs!