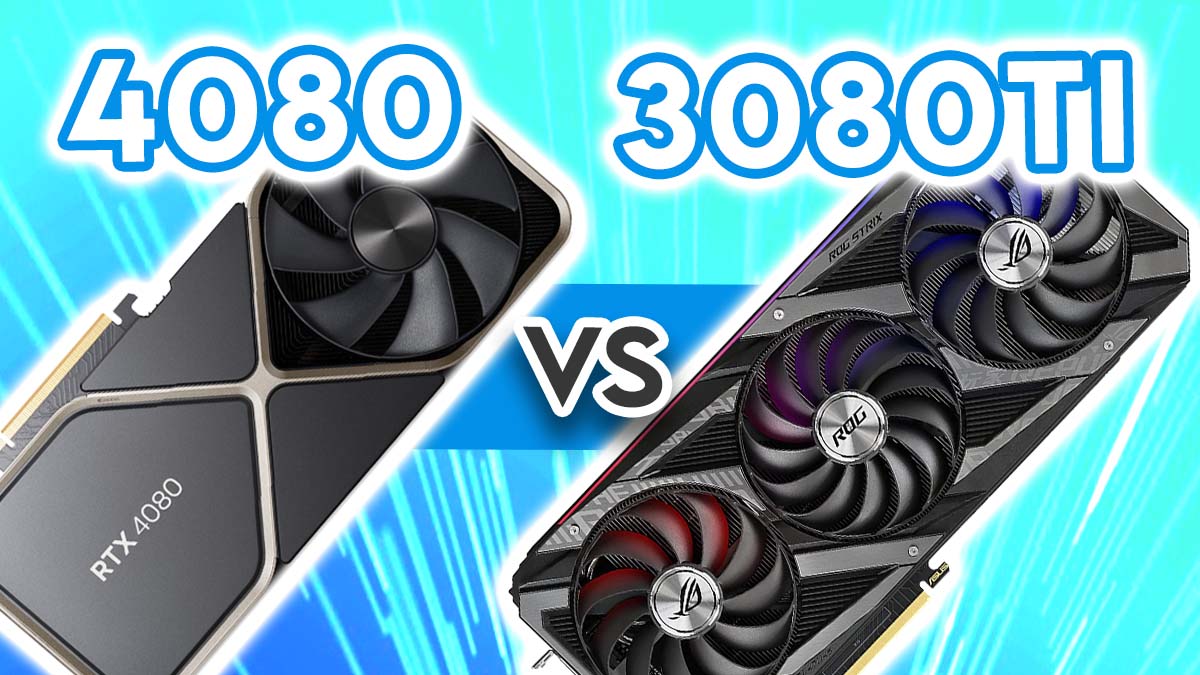 After much anticipation and plenty of waiting, Nvidia‘s brand new GeForce RTX 4080 is finally here! We’ve got our hands on the Founders Edition, along with a few of the new SKUs, and we’re here to show off the performance of this GPU. With any new launch, we’re always wondering how the new cards compare against their predecessors, and we’ll be looking at this in this very article.

Is the new RTX 4080 a worthwhile pickup for some extra frames and performance, despite the price increase? Or is one of Nvidia‘s most popular GPUs, the RTX 3080Ti, a better bet to save yourself some cash? We’ll be answering both of these questions in a GeekaWhat Versus Battle, comparing the two cards side by side to see how they perform!

Nvidia’s brand new RTX 4080 is actually the second GPU that we’ve got our hands on from the RTX 4000 launch. With a rather successful launch from the first set of 4090 SKUs, Nvidia has definitely shown off what the new architecture is capable of, and the 4080 has followed suit here. Hardware wise, the 4080 sits relatively on par with the 3080Ti, aside from the VRAM capacity and clock speed, where the 4080 maxes out at 2.51GHz on its boost clock.

In terms of performance, the 4080 has incredible legs in 4K with Ray-Tracing enabled. With the new Ada Lovelace architecture, the RTX 4000 cards support the new technologies that come with the generational changes. Massive reworks and upgrades have been made real-time Ray-Tracing and DLSS, reducing performance overhead and increasing graphical fidelity. Frame Generation technology is absolutely ground-breaking, and is such a huge selling point for the new cards. I can’t wait to see this implemented on cheaper RTX 4000 SKUs, as it’ll give consumers the opportunity to enjoy much higher resolutions without the performance overhead.

Moving onto pricing, this is where the value of the 4080 starts to come into question. Despite the excellent performance, this GPU sits well over the $1000 mark. In contrast to the original MSRP of the 3080, this is over a $500 increase. Compared to the 3080Ti this is also a big price jump, which could be a deal-breaker for many consumers. Ultimately, if you’re picking up an RTX 4080, you’re probably building a rather powerful PC and expecting high prices, but I can’t deny being disappointed by the rising prices, which Nvidia clearly aren’t helping here. However, the 4080 is an incredible card and definitely worth picking up if you can afford the price tag.

Nvidia’s RTX 3080Ti is one of the best cards within the RTX 3000 range. Despite the increased price tag compared to the 3080 (which topped out over $1000), you get access to some incredible hardware. The 3080Ti sports 12GB of GDDR6X memory, over 1000 CUDA cores, and 80 RT cores, which beats out the 3080 hardware. But where does Nvidia’s ‘golden graphics card’ stand when it comes to performance?

Pretty damn well, in fact! The 3080Ti is clearly not a card designed for 1080P gaming, or even 1440P, but it can handle both of these resolutions without issue. Bumping things up to 4K is also no problem for the 3080Ti, especially when DLSS is enabled. Ray-Tracing does become an issue when running certain games at native 4K, but ultimately, this is down to poor optimisations as opposed to the performance of the graphics card. Although the RTX 3080Ti doesn’t have access to all of the new DLSS technologies, it holds up really well on its own when it comes to 4K native resolution, and with DLSS 2, most games don’t tend to pose an issue!

Price wise, this is unfortunately another expensive card, with the original MSRP sitting just over the $1000 mark. However, the RTX 3080Ti is exceptionally well priced at the time of publishing. Due to the launch of the new cards, many of the RTX 3000 cards have inevitably dropped in price, making them worth picking up based on the much lower price. Although the 3080Ti doesn’t have access to all of the new technologies that come with the RTX 4000 SKUs, it is a very competitive option when compared to the new cards. Should a potential RTX 4070 or 4070Ti compare to the 3080Ti in terms of performance but at a lower price, Nvidia will have demonstrated incredible aptitude yet again.

In order to ensure that our components are tested fairly, we’ve developed a rigorous testing methodology that provides real-life context as to how each component performs. This involves benchmarking each part within a game using a repeatable run (by showing off the settings) in a build packed with similarly matched components, i.e. high-end parts are paired with other high-end parts, and not budget or weaker options.

We do this to let you know exactly how a GPU or CPU might perform in your favourite triple A and Esports titles, whilst remaining transparent and showing that you can attain similar performance with the same components. The second part of our methodology is to remain impartial and honest in our opinions. We’ve highlighted this in our editorial promise in the About Us section.

To test out the 4080 we put on Valorant at 4K to see what kind of frames this powerful GPU could output. Straight off the bat you’ll immediately see the 4080 soaring to the top of the graph with an average framerate of 447 which sits almost on par with the AMD’s previous generation 6950XT.

The 3080Ti isn’t quite able to output the same amount of frames that we reached with the 4080, but the performance was equally impressive. In this title the 3080Ti had an average framerate of 404 making it perfect for those playing this popular Esports title that want minimal frame dips.

In Battlefield 2042 we cranked up the settings to 4K again to see where the 4080 would lie. Overall we were very impressed with the 4080’s performance, giving us an average framerate of 112 which gives it second place amongst the other graphics cards we’ve tested. The 3080Ti isn’t able to surpass the 100FPS mark sitting at around 85 on average.

In a perfect world both of these cards would be reaching well over the 144FPS point for a buttery smooth experience, but both of these framerates are still perfectly playable. And considering this is at 4K we’re still equally impressed.

In Fortnite we changed the settings to 1080P Competitive to see how many frames each of these GPUs could output in this popular title. Needless to say both of these GPUs definitely impressed. Most consumers aren’t likely to be picking up this GPU for the purpose of 1080P, but if you are, you’ll have plenty of frames to play around with. The 4080 was able to give us an average of 304 which again puts it very close with the 6950XT in terms of performance.

The 3080Ti wasn’t quite able to hit 300 frames, but both of these GPUs provided a very playable experience coupled with a high refresh rate, making it perfect for those with top-end monitors.

And finally in Call of Duty Warzone, this is where things get somewhat interesting. Here we are quite literally seeing the generational difference in performance with the increase in frames when comparing both of these GPUs. The 4080 consistently gave us more than 144 frames which is ideal for a fast-paced title like Call of Duty. But on the RTX 3000 side we were a little bit disappointed.

Keep in mind we’re running this game at 4K, but it is still somewhat disappointing to see the 3080Ti only able to reach 105FPS on average. We were expecting a little bit more just to give us better performance with higher refresh rate monitors, but both of these GPUs still provided over 60FPS which is perfectly playable.

Looping back around to the questions that we asked at the start, is picking up an RTX 3080Ti a better bet to save some money, or is the 4080 worth the performance improvements despite the cash increase? Well, our answer isn’t as black and white. If we look entirely at performance, the 4080 outshines a large bulk of other graphics cards, and as such it comes out on top when we compare to the 3080Ti. However, despite the increase in frames in most titles, I’d argue it probably isn’t enough to necessitate a direct upgrade.

The 3080Ti still stands strong today at a 4K resolution, and although in some of the titles we didn’t experience a high refresh rate, the gameplay itself was more than playable, combined with excellent visual fidelity at this high resolution. This puts the 3080Ti in a much better position compared to the 4080 in terms of price as well. You’re getting an excellent card that holds up very well in 4K for much less than $1000 based on the current market.

Although I think the 4080 is an excellent card, and really demonstrates how strong Nvidia are currently when it comes to generational improvements, I think if you’re upgrading from a similarly specced RTX 3000 series card, you might be disappointed. Not necessarily in terms of productivity performance, but when it comes to gaming, I don’t imagine you will see a noticeable performance improvement. Regardless, both of these cards are excellent pickups dependent on your use-case, which we urge you to consider before deciding on one of these cards in particular!